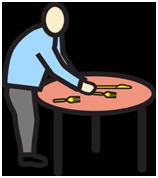 Sometimes I like to make a game of cooking something with just what’s left in the pantry. Sometimes it is for fun, sometimes it is because I’m too lazy to go to the store, and sometimes it is purely from necessity. Trying to find an appetizing meal out of random ingredients can put your creativity and problem solving skills to work. I had been doing this for years when I saw a similar challenge on a cooking competition show. The chefs must create a meal using only the ingredients given to them. There submissions are judged on taste, creativity and use of ingredients. I’ve come up with some very unique and tasty recipes myself that way. Necessity really can be the mother of invention. 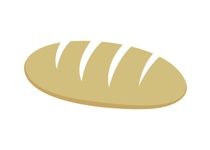 Switch scenes to the Old Testament. In I Samuel 17, David hears Goliath defying God and is incensed. He offers to fight Goliath while all the others are shaking in fear. All they see is the giant in front of them. Instead of looking at the giant, David points out how God has always come to his aid. So, he picks up five stones and his slingshot and defeats the giant. On top of that, he only needed one of the five stones to get the job done. Why, you might ask? David knew that God was bigger than any giant. He saw what God could do.

“And he said unto me, My grace is sufficient for thee: for my strength is made perfect in weakness. Most gladly therefore will I rather glory in my infirmities, that the power of Christ may rest upon me.” (2 Corinthians 12:9)

We can’t feed the multitude or defeat the giant alone, but when we give the situation to God and offer ourselves to His will, He will make it more than enough. We become conduits for God as He works through us, allowing us to have a part in His ministry. It’s not what you have but what you do with what you have that counts. So, when we are faced with a job that seems too big for our meager resources, whatever they may be, if we give it to God, He will make it more than enough.

This video takes it a step further:

It Depends on Whose Hands It’s In.