I was asked to sing the special music for my church’s Facebook live service this week, which actually makes me more nervous than singing in front of people. So, I was running song titles through my head trying to figure out what to sing. I wanted something that would speak peace to the hearts of those listening. After mentally going through a list of more modern songs, I eventually came to a song whose words spoke directly to the current situation even though it is an old hymn. I debated over whether or not to sing it because it is an old hymn and it’s not a perfect fit for my vocal range. Let’s be honest, I want to sound good on the internet, but the message is more important. While I struggled to make a decision, I came to the conclusion that old has become a negative term in today’s society. It has come to mean useless and outdated, but it can mean priceless and precious.

“Thus saith the Lord, Stand ye in the ways, and see, and ask for the old paths, where is the good way, and walk therein, and ye shall find rest for your souls. But they said, We will not walk therein.”

Ask or seek the “old” paths sounds like going backwards in the context of modern society. Not all old things are bad just because they are old. Take literature, for example. Something becomes a classic because it is able to stand the test of time because it holds a universal truth. Many of the old hymns were originally poems that were eventually set to music. Even if the tune is not your style, the words still hold powerful truths. They are sermons in song that attest to the character of God.

The scripture verse also tells us it is a good way, and if we walk in it, we will find rest for our souls. Society is in turmoil right now. All their new ways are not holding up under the pressure of the pandemic. They are in a panic, angry, scared, and unstable because they were unwilling to walk in the old ways. Humanism says man can do anything if he puts his mind to it, but, if nothing else, this pandemic shows just how little control humans have in the grand scheme of things. There is peace in walking the old paths because we don’t walk alone. God walks beside us. I think the words of an old song sum it up best: 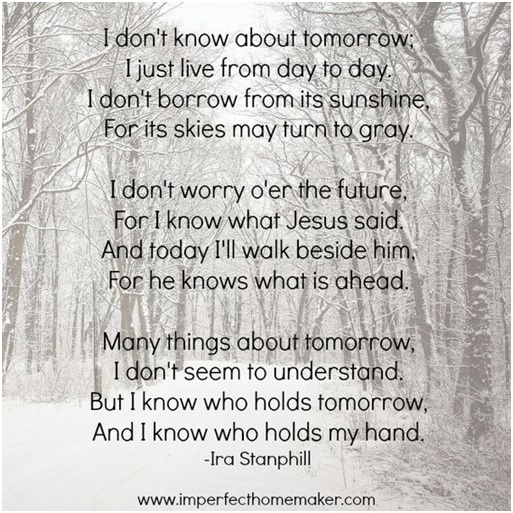 One thought on “An Old Song”