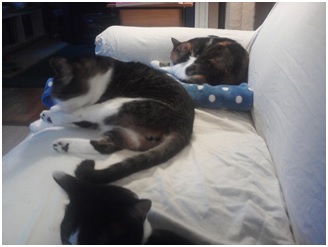 It usually happens at least a few times a week if not a few times a day. Meep will suddenly jump off the couch and burst into a run, tearing through the house at breakneck speeds. She often takes laps through the house, or sometimes it is suicide run in a straight line. Sometimes the other cats join in. It lasts for several minutes and then stops as suddenly as it started, followed by a thorough bath and a series of naps in various locations throughout the house.

On other occasions, the three cats will combine forces, especially when uninvited guests enter the picture. Whether it is a mouse or just a bug, the three cats will take turns stalking their prey with patience and diligence. One night in particular I found all three surrounding my piano, each one covering an avenue of escape. I later found them in the same position around the refrigerator. The next morning their attack plan was proven effective when I found their prey, an unfortunate mouse, belly up in the middle of the floor. The cats were inordinately pleased with themselves. It had taken all night, but they had achieved their goal.

There are times in life that call for a sprint, a quick surge of adrenaline in an emergency situation, but for the most part, life is a marathon. It takes patience and pacing, like the cats hunting for their prey. Those two traits are rare in today’s society, where people are always in a hurry to reach their goals and get to the top any way they can. 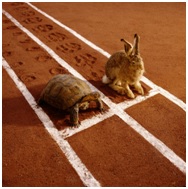 Most people are familiar with the story of The Tortoise and the Hare. The hare was a sprinter who was always bounding off and then getting distracted. The tortoise moved at a steady pace, keeping the goal in mind as he moved forward. He wasn’t distracted by what was going on in the world around him, especially not the hare. In the end, the tortoise won the race because his focus was on crossing the finish line to the best of his ability, not on what the hare was doing.

As Christians, life is mostly a marathon which is more in keeping with the attitude of the tortoise than the hare. Hebrews 12:1 says, “Wherefore seeing we also are compassed about with so great a cloud of witnesses, let us lay aside every weight, and the sin which doth so easily beset us, and let us run with patience the race that is set before us.” The world is weighed down by doubts and fears, but Christians know the end of the story. We are victorious through the sacrifice of Christ, and we strive each day to follow in his footsteps as we run our race.

Life is a marathon; therefore, we need to train like a marathon runner. So, as the hares of the world go bouncing off in a million directions announcing the end of the world, keep moving forward toward the goal of becoming more like Christ, one step at a time. Because we know: “that tribulation worketh patience; 4 And patience, experience; and experience, hope: 5 And hope maketh not ashamed; because the love of God is shed abroad in our hearts by the Holy Ghost which is given unto us” (Romans 5:3b-5). We have hope because we know that Christ has gained the victory for us. If we keep our eyes on him who is our goal, the worries of the world will fade from view. Like the tortoise and the cats, we too will reach the goal if we run with patience the race before us. 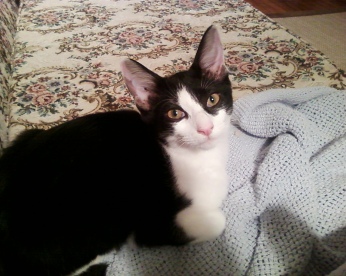 Meep is persistent when she wants something. That’s a polite way of saying she’s pushy. For example, she has a thing about having to share my food whenever I’m eating. I’ve read that some breeds of cats have this tendency, so it may be genetic. However, it is also quite aggravating at times and often ends with her getting her way so that she will leave me alone. She can be quite ingenious in her methods.

One day I was eating my lunch, and as usual she was sitting on the arm of the chair next to me. Every few seconds her paw would come out and tap my arm, or reach for my plate. I would wave her away or try to ignore her. This had been going on for several minutes without results, so she changed tactics. I had a glass of water sitting on the end table in a plastic tumbler. With the precision and audacity only a cat can pull off, she swatted the glass and knocked it over. As the water went pouring out, I jumped up and put my plate on a nearby footstool. I ran into the kitchen to grab a towel. When I returned, I found Meep making off with part of my lunch.

I would have thought it was just an opportunistic grab if she hadn’t tried the same thing a few days later. She had planned the whole thing. From then on, I had to keep an eye on my water glass or use heavier glassware that was harder to turn over. Cats are persistent. When they want something, they will keep trying until they get it, whether it is a bite of your food or just some attention. They rarely take no for an answer. If we applied that level of persistence to our prayer lives, imagine what God could accomplish through us. In Matthew 15:21-28, a woman came to Jesus with a need and refused to leave until the need was met. She had faith that Jesus held the solution to her problem:

“21 Then Jesus went thence, and departed into the coasts of Tyre and Sidon.

22 And, behold, a woman of Canaan came out of the same coasts, and cried unto him, saying, Have mercy on me, O Lord, thou son of David; my daughter is grievously vexed with a devil.

23 But he answered her not a word. And his disciples came and besought him, saying, Send her away; for she crieth after us.

24 But he answered and said, I am not sent but unto the lost sheep of the house of Israel.

25 Then came she and worshipped him, saying, Lord, help me.

26 But he answered and said, It is not meet to take the children’s bread, and to cast it to dogs.

27 And she said, Truth, Lord: yet the dogs eat of the crumbs which fall from their masters’ table.

28 Then Jesus answered and said unto her, O woman, great is thy faith: be it unto thee even as thou wilt. And her daughter was made whole from that very hour.” 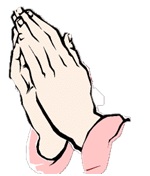 Her request was granted because of her faith in Jesus’ ability to solve her problem and her persistence in asking. We have not because we ask not or we ask for the wrong things (James 4:2). When we pray in God’s will, we can be sure that He will answer our prayers, but we have to be willing to accept His way and His timing. If we are as persistent as the Canaanite woman, or Meep, we will see Him move in our lives because the purpose of prayer is not to change God’s mind; it is to change us so that we are more like Jesus. Keep praying and see what He will do.