On more than one occasion in my life, I have come to a problem where I couldn’t see a solution. I have looked at a stack of bills and a list of income and thought that will never work. There is no way to stretch the money to cover all of that. I would worry and fret and try to think of ways to expand my income or reduce the bills, but it never worked. Eventually, I would remember to pray. Usually I had to get to the point where I honestly said, “Lord, You’re the only one who can do this because there is no human way possible. I leave it up to you.” Then the answer would come and everything would get paid and always in a way I had never imagined. It was a God thing.

These kinds of situations show up as frequently in the Bible as they do in my life. For example, Judah was about to be attacked by a vast army, and the king was afraid, so he sent for a word from God. In 2 Chronicles 20 a prophet replies, “15 And he said, Hearken ye, all Judah, and ye inhabitants of Jerusalem, and thou king Jehoshaphat, Thus saith the Lord unto you, Be not afraid nor dismayed by reason of this great multitude; for the battle is not yours, but God’s…17 Ye shall not need to fight in this battle: set yourselves, stand ye still, and see the salvation of the Lord with you, O Judah and Jerusalem: fear not, nor be dismayed; to morrow go out against them: for the Lord will be with you.” The people stopped and worshiped God, and in the meantime, their enemies killed each other without them lifting a finger.

Notice the words “…for the battle is not yours, but God’s.” As humans, we are prone to be independent and control freaks, but God calls us to depend on Him. Sometimes, or quite often, He has to put us in situations where we realize our need for Him; otherwise, we are lulled into a false sense of security. We think, “I got this.” In reality everything we have we owe to God, including our very lives. He is the one who is in control. 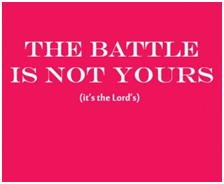 The worry will get you nowhere. Luke chapter 12:25-26 says, “ 25 And which of you with taking thought can add to his stature one cubit 26 If ye then be not able to do that thing which is least, why take ye thought for the rest?” Worry accomplishes nothing except raising your blood pressure. It doesn’t solve anything and makes your life miserable. John 10:10 says, “The thief cometh not, but for to steal, and to kill, and to destroy: I am come that they might have life, and that they might have it more abundantly.” The enemy wants you to be scared and to steal your joy, but Christ came so we could live the abundant life.

So, the next time you face a situation or a problem start with prayer instead of making it a last ditch effort. Relax and let the Lord fight the battle. Do your part in being obedient and then watch to see what He will do. Take a moment and listen to some advice from a man who knew about seemingly hopeless situations:

The Battle’s Not Mine by The Freemans